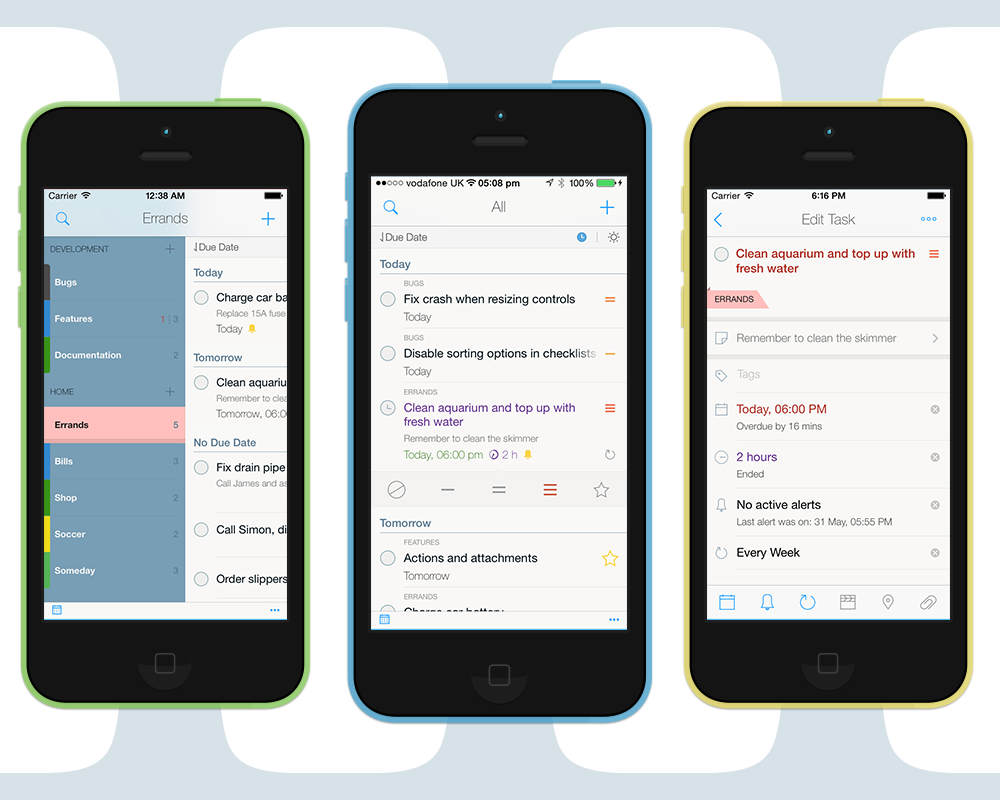 We’ve finally come out of the woods and felt it’s about time we publish an update on what we’ve been doing, what’s coming next and what’s so exciting about this next big update? Today, folks, is the long awaited ta-da moment.

They say pictures speak louder than words. Maybe not so much for this post in question. The glaringly obvious visual changes, design language and UI elements is there, but what it can’t tell is how amazingly tangible it now is. That’s what this update has been all about. We kept improving it till there was, for now, no more room left for improvement. Everything is more fluid in every way imaginable. Don’t take our word for it, see for yourself:

Everything – including the stuff that was already there before. It’s new. The underlying code is new, the way you’d interact with it is new, the way tasks get updated, added, deleted, moved, dragged; from tabs to tasks to tags to editors – we literally dumped all the previous code ever written and re-wrote it from scratch. That took a lot of time, but boy are we glad we took this route. It opened up ways to new things, new ideas and new ways of doing the same ol’ stuff.

2Do has always had this unique look and feel about it, including its ability to offer everything under the Sun without compromising ease of use. The list tabs that we all love, as well as the several different intuitive ways you’d go about managing your stuff. The core ideas it evolved with over the years were all great. We wanted to retain all the goodness and improve upon the core. Our journey involved working on new ideas as well as porting proven ideas and concepts from our Mac app, ideas that earned it the ‘Best of 2013’ title on the Mac App Store. Without further ado, let us delve straight into some of these. Bear in mind though, this post is in no way an expansive overview of what’s to come. This is merely a glimpse of what to expect – a very thorough glimpse to say the least.

Up until now, the ability to move rapidly between your lists, tasks and tags was only possible on the Mac, thanks to the amount of screen real-estate you inherit. We’ve explained in a previous post how Tabs make our lives easier, by allowing us to switch context easily and effectively; something that we believe is vital when it comes to being productive. Our recent update for the Mac showed that people fell in love with Tags, all over again. It boiled down to mainly one thing: the ability to quickly and effectively reach out and access tags in between your usual workflow, so you could find stuff quicker, and the quicker you find them, the quicker you do them.

Tags have been part of 2Do for numerous years, but it’s the first them ever that we’re bringing them out in the open; access them as you would on a Mac, right next to your tasks. A single swipe gesture and you’re in in Tags. In an instant, know which tasks are tagged, known which ones aren’t, and find and act upon those that are. It’s simple, beautiful and you’ll love it.

Who didn’t love List Groups when they got debuted on the Mac last year? It was our little pride and joy. The ability to create groups out of lists, to collapse them and re-arrange them was a much welcomed featured in v1.5 of 2Do for Mac. We wanted to bring them over to iOS but without the added clutter. Tabs, as we knew them, have now changed forever. Instead of tabs, they’re simply lists. We no longer discriminate against list names that we could not fit nicely in a square, instead you’ll see them fade out subtly, inviting you to a great new feature: expanded list drawer. A single swipe will expand, collapse, or partially collapse lists. 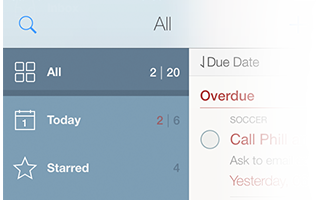 Lists also now limit the amount of color and joyfulness they emit, so that your eyes can concentrate calmly on other important tasks at hand. Colored selection is now limited to only the selected list, while the rest show a glimpse of what’s set. 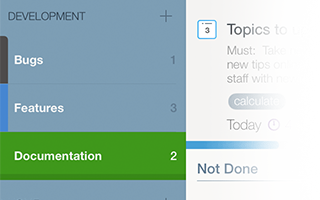 Focus lists get special treatment by representing them with icons. Their names, as well as other longer named lists and list counts now appear only when expanded. 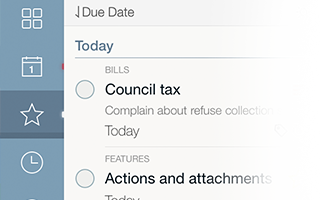 When the lists are partially collapsed, the equivalent of ‘tabs’ from version 2, instead of showing an endless list of badges with counts showing on top of each list, 2Do will now only grab your attention when something deserves it. You’ll see a warm white or a red LED when something in the list is due Today or Overdue respectively.

Let’s face it, 2Do wasn’t always that quick to use when you wanted to do that quick brain dump, whilst keeping the rest of the tasks visible in the list in front of you. You would be taken to an ‘Add screen’ where you’d lose track of what had already been added and what the last few tasks were that you just added. Introducing the ever so easy to use Quick Add:

Simply tap and hold on the + button and it will drop in from above. By default, it will pick the default list you’ve selected in preferences (or the GTD Inbox if you have that switched ON), and will allow you to add one task after another by hitting enter in between.

2Do isn’t a pure GTD app, but it’s better than one. Simply because it lets you bend the rules. As much as we love letting our users bend the rules, we bent one ourself by introducing a new option that can be switched on from under Preferences: GTD® Inbox. What will it do? For those familiar with GTD, it will be made your default collection list. It will also get special treatment above the Focus lists as well as other all rounding goodness. To be fair, you could already create a list in 2Do and name it ‘Inbox’ and it would more or less do the exact same thing. But it always lacked that ‘Native’ support which a lot kept asking for.

When we did the first two versions of 2Do, we were quite proud of what we had achieved at that time. Adding tasks was a breeze, and the editors were easy to use and straightforward. However, we wanted that desktop-class quick editing support we added to 2Do for Mac, you know, where you begin editing a task’s due date, but want to quickly add an attachment or create an alert. Who’s got time to tap on ‘Save’, ‘Cancel’, ‘Back’, ‘Back again’, ‘Tap on next option’ in this time and age? And so we designed a much better Task editor. One that reduces clutter, and adds amazing flexibility and ease your edits.

The Task Editor now only shows stuff that’s actually assigned / set. The rest of the options appear on a bottom toolbar. Tags are forefront and allow you to edit-in-place. You get suggestions as you type, and have the added flexibility of quickly launching the tag editor and select tags.

Once you fire up an individual editor, the editors themselves are now served as ‘cards’; ones that you can switch between easily using a simple swiping gesture. While editing due dates, the rest of the options are available to you at all times. Tap on any to save-and-switch immediately. Every thing is incredibly fast and easy to use.

For the past few years people have written to us and reached out in different ways to find out if we had any plans of adding the ability to set a duration on a task. We didn’t, up until now. It’s a beautiful new feature which gives you that extra flexibility and control over your tasks. For example, a task due on the 30th of June, with a duration of 10 days would appear in ‘Today’ as well as your Smart Lists starting 20th of June. As each day progresses, you will be able to visually see how many days are remaining till the set due date, allowing you ample time and reminder to finish that job.

Without due dates, durations would serve as simple time estimates. This would greatly help in sorting your tasks as well as prioritizing them based on their set durations. You might, for example, wish to prioritize all the tasks that would take 10 minutes to complete, compared to ones that would take 2 days.

A usable calendar is what differentiated the Mac app and the iPad app from the iPhone app. We’ve ported all the goodness over to the iPhone, and it works in both landscape and portrait. Plus you can filter on dated tasks, filter on a range of dates as well as drag and drop tasks to quick-defer.

A lot more. But we’re not going to cover it all in this one post. The purpose of this post was to reinforce the fact that 2Do III is very much real! And of course to give you an idea of what to expect. You haven’t as yet seen what we’ve got in store for our iPad users. It’ll be built on top of the layout we’ve pinned for the iPhone, but will be a lot better in every way possible, compared to the current version.

We’re still looking at another months worth of development at least. We still have no ETA but are aiming for July if all goes according to plan. As mentioned in our previous posts, this update is going to be for free. It’s a whole new app in all respects, but we respect the loyalty of our users as well as their investment into 2Do, both in terms of the purchase and time spent using it.

Finally, there’s one announcement to be made. We wanted this update to be special, given all the time and effort gone into it. By that we mean we wanted people to be able to try it, use it, feel it and take part in its development process so they know the update is well beyond everything they ever hoped for (well, not everything I suppose). Developers unfortunately have a limit on the total number of devices they can support when sending out invites to join beta. Thanks to an Enterprise Developer account, we are now able to deploy 2Do Beta on as many devices as we wish (for testing purposes only of course).

Anyone interested in joining beta can now apply! We still do not guarantee admission as there’s a limit on the number of people we can allow to join in order to keep our group discussions sane. If you make a strong enough case, you might make it through: