With 2Do v1.5, we’ve hit a major milestone today. Not in terms of what it can do, but what it will be capable of doing one day, collectively across platforms. You know, the bigger picture. But it already does a lot, you say? Yes, it’s probably easier to describe what 2Do can’t do, than to list the things it can. But that’s beside the point.

I still remember the day we embarked on the journey of pinning down the ‘to-do list problem’, as we called it, long before 2Do saw daylight. It was never meant to be a traditional Getting Things Done (GTD) app, nor a fancy app that made some noise and recognized a few gestures. We wanted it to be meaningful, you know, an app you and I could use without first reading up literature on GTD. Not just during a trip to the local grocery store, but for everything else.

It became immediately obvious. ‘Tabs’, we exclaimed! There’s a reason why tabs are everywhere now. From Chrome to Safari to Finder (finally in Mavericks), tabs have found their rightful place in our complex lives. Apparently we humans are able to focus better when presented with disparate information in separately:

If you were to plough through the enormous amount of literature on being productive, you’ll see how well this fits in. Contexts, projects, lists, areas of responsibilities; everything could be represented elegantly with this one simple concept. This gave us the solid design direction we needed.

Next up was color. Our brains love color. It helps us relate to events and remember things. All this led to the eventual release of 2Do in 2009.

Back to the bit about hitting a milestone. 2Do v1.5 for Mac is packed with so many useful features, we think you’ll want to be productive, just for the sake of using the app. With this latest update, we’ve finally finished writing a single core library that will eventually be shared by future updates of the iOS apps (iPhone and iPad). That will mean uniform integration across platforms, solid stability, big performance improvements and amazing connectivity (as if all that wasn’t already there!). We started working on this ‘smart productivity engine’ over a year ago, re-writing everything from scratch, using the latest technological improvements offered by the latest versions of Mac OS and iOS, and some common sense.

You’ll love what we have in store for iOS 7 and beyond. For now, here’s the latest and greatest for Mac OS. You can download it from the Mac App Store from here: 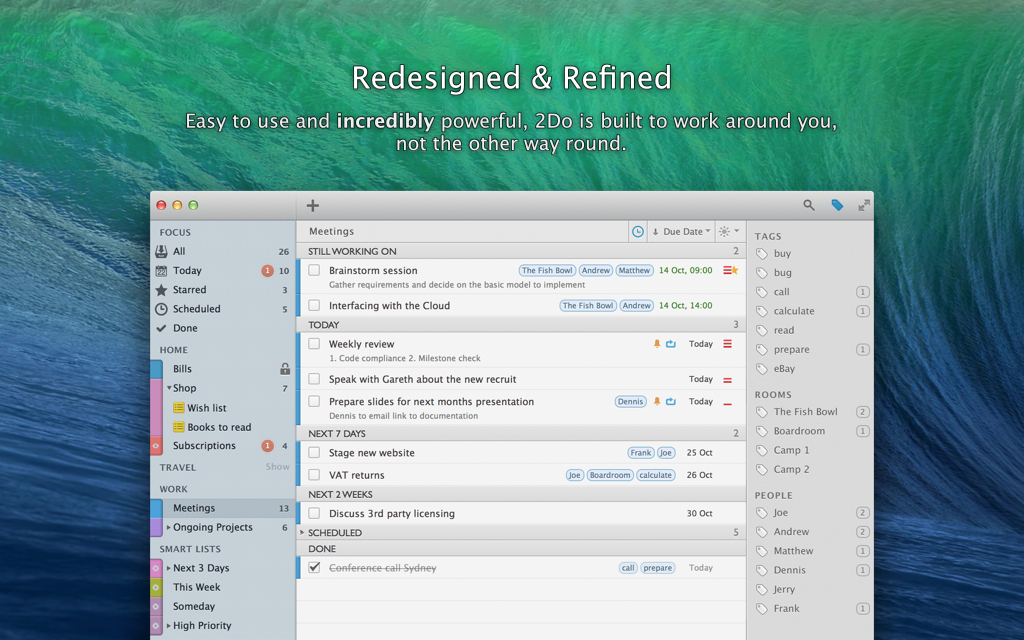